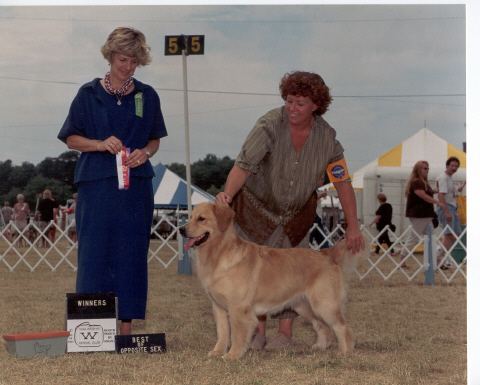 "Page" pronounced as french --"pahj", Is my lifetime favorite girl. What a show dog! Couldn't really miss that mark, with two parents, Primaire and Sinclair, who each had ring presence like we wish they all did. I adored her type, attitude, movement, and personality. She was my little tomboy, loved to play any and all of the games. She finished with style -- both majors were specialties, two breed wins from the classes, and finished with a Group 3, all breeder-owner handled. Page's son from her breeding to Bertram is "Dolan", who finished with great flair and lots of accolades, her daughter by Rutledge, Meme, was a joy to show, major-pointed at 13-months of age and was my first Best Puppy in Sweepstakes, as well as demonstrating exemplary field drive. And Meme's littermate, Cedric, came back to me after living elsewhere for 2 1/2 years and finished his championship at six years of age, owner handled. Page had only nine puppies in her lifetime, to have counted these three as my own I consider to be extremely lucky.

Page became my first Grand Champion when she finished her title at 11 1/2 years of age, breeder-owner handled.. She was a show dog like no other to me and consistently demonstrated the glorious ring presence she had shown since her debut at two months of age in her first fun match, where she went Group 1. Most of her GCH points were from the Veterans Class and the judges were all awed at the command of the ring that she still possessed.

I lost Page at age 12 after a nearly yearlong battle with histocyctic sarcoma. She never showed a sign of illness until the final week, she smiled through any discomfort she may have felt and brought me happiness every day after giving me ample notice of her departure. The end was still torturous but I cannot regret one single day of her superior life. There will never, ever be another just like my Pagetti.

Page's pedigree can be seen here.